When I entered the workforce (back in the Dark Ages) it felt like I stepped into a jungle of strange people, places, and things.  Most of the people were not like me.

I go out of my way to please people and keep harmony.  I enjoy teaming up with and getting  other people’s ideas.  I don’t mind taking a back room support position.  When people make mistakes or aren’t real accurate, I seem to have patience in these matters.  But to my wide eyed amazement, other people weren’t always like this.

If someone had introduced me to the DiSC Model when I was 18, it would have saved me a lot of heartache, frustration, and conflict.  I didn’t know that there are “styles” of behavior.  If as a young adult I’d understood some people would rather slit their wrists than work well with others my feelings wouldn’t have been hurt so much!
Somehow, learning that other people respond to situations in styles different than mine makes it all easier.  (It’s like when you accept that life is difficult, it isn’t quite so hard.)  Recognizing that people operate using different behavior styles made it easier for me to understand that a lot of other people’s actions and reactions have more to do with “them” than to do with me.  That is big.  Suddenly interaction becomes less challenging on every level.
An early psychologist named William Moulton Marston wrote a book in 1928 titled Emotions of Normal People.  It did nothing to further his interesting career*, but it eventually became the basis for the DiSC Model.  He identified what h 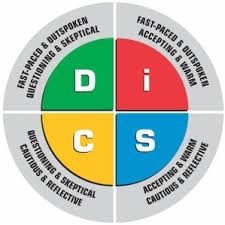 e called four “primary emotions”.  These evolved into what we know today as Dominance (D), Influence (i), Steadiness (S), and Conscientiousness (C).
The 4 Primary behaviors in a nutshell**:
Dominance: direct, strong-willed, and forceful
Influence: sociable, talkative, and lively
Steadiness: gentle, accommodating, and soft-hearted (me!)
Conscientiousness: private, analytical, and logical
The process of measuring these behavior styles has also evolved over the years.  There is now a validated and reliable DiSC Assessment tool which has been taken by millions the world over.
This blog will be about using DiSC knowledge to communicate and relate to other people better.  For example, using DiSC to resolve conflict, to be better heard, and to sell things more effectively.  Stay tuned for my next blog when I share how to determine a person’s style, including your own.
*Marston was an interesting character.  He was a feminist, invented the systolic blood pressure test which was a component of the original Polygraph Machine, and originated the Wonder Woman comic strip.  He also lived in a polyamorous relationship with two women.

**From the Everything DiSC® Manual by Mark Scullard, Ph.D. and Dabney Baum, Ed.D.